What a week. I keep saying shit like this but this was the best week on stream. Results wise, viewershipwise, funwise. It had everything! After the second place last week I got even more relaxed than I’ve lately been. Monday started of disastrous with a lot of early bustouts. The $44 bounty was still going though and that’s always hopeful. A shitty day can turn into breakeven if you bust a few people deeper in this tournament. I always say it’s my favorite tournament and it always feels that way. It was such a back to back feeling (the blowup friday attempts don’t count do they?). We made the final table again having a decent bounty but nothing special like the $1k bounty last time. This means that we were gonna have to put some work in. In the end though with good play and luck on our side we got it heads up and this time I was able to clinch victory! $4100 in the bag. We got to almost 4000 viewers. That’s a record when you don’t count the hosts. Expect the video on youtube soon. I’m uploading the second place BB$44 today btw.

A second place and a win within a week. Pretty fucking crazy! What a freeroll the next few weeks will feel like. Tuesday we did regular tournaments and didn’t amount to much poker wise. Viewer wise it was chaos. LiquidDota player MATUMBAMAN raided the channel. He hosted for 6000 viewers and they had a lot of things to say lol. Mostly Jebaited (I love that fucking emote). So grateful to the gamers giving me hosts. Shoutout to matumbaman, sjow, Iwilldominate. They have no idea how much they help me build on what I love doing. To put in perspective how crazy this week has been viewerwise: This week I have had as many viewers as all of August… And August was a good month O_o

Wednesday I was able to build on the rush. Finally drew some blood in the Battle Royale. In the end we busted 7th for $1350. With some other cashes another very profitable day. Too bad I wasn’t able to close but that’s the nice thing when you come off a win. It really doesn’t matter. If you havent had a top 3 finish for a while those 7th places hurt. Now you feel better about these and they are just decent results. Or as Myrthe likes to say when I tell her I finished 10th: Nice!

Thursday was a very special day. Started out with PLO. Sorry the PLO has been moving around in the week, but this way I get more content out. If I didn’t do PLO on thursday I would have had to take the day off. It worked out nicely and we crushed some souls on .fr ending in a €500 win. I played 2/4 as well, which is the highest PLO I’ve played on stream. At night we had a special event in Holland Casino Amsterdam.

Frank op de Woerd from Pokernews started the Dutch Hall of Fame last year. The first 3 members, deservedly so, were Marcel Luske, Noah Boeken and Jorryt van Hoof. I was nominated for one of two spots this year. The existing members ended up chosing me and Rob Hollink for the next two! Rob is an absolute legend and it’s a huge honor for me to be inducted. I’m proud of myself :D. Myrthe and my best friend Louk were there with me, which was really nice. It’s the first time I got to take Myrthe to a big poker event, since I don’t play live much. 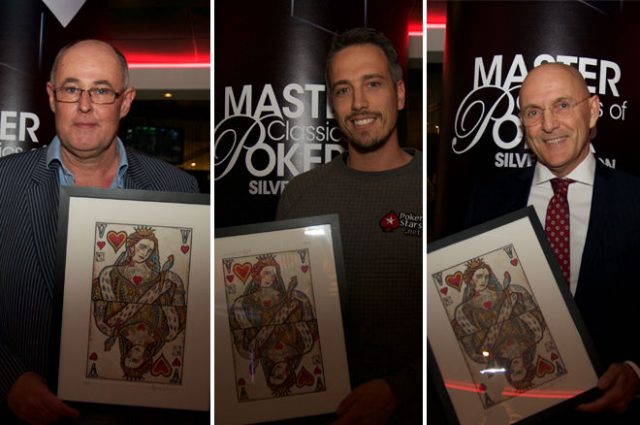 Right when we walked in we ran into bizzo1234 and extemp0re. Really, really awesome to meet those guys. They live up to their online reputations. We had drinks most of the night and also ran into STIJJNNNNN and glaspeer, as wel as jaapjejaapje. Really awesome to meet viewers and we had a lot of good laughs. And drinks. MPADAM joined us after work too, which made the party complete. Also a very nice guy, same as the others. I got home about 4AM and was pretty spent. I stayed in bed for a while watching House of Cards with Myrthe. Having a late start to blowup Friday. At around 4 it was go time though.

Christ what a Friday it was. I didn’t even know how it would pan out with the tournaments. This was a showcasing that it didn’t matter though. I most played lower buyins but I think everyone had a blast. I say everyone because there is a lot of chat participation with the craziness. I had one of the hardest ball fails so far btw, leaving my leg blue and bruised haha. Definitely a top 3 blowup friday for me. I made so many tripple barrel bluffs and actually put myself in a sick position in the Bounty $44. I ended up losing a heart breaker but it didn’t really matter. Britney Spears was there to comfort me. The mods told me I chat warned myself to pokerstars support as well on the table. Something I don’t remember doing :$. After poker we even won a 5’s game in H1Z1!! My first win!

Today I hope to be able to stream for a few hours. I won’t stream poker though, it will probably be Day of the Tentacle. An oldschool game I thoroughly love. They remastered it so it looks nice again. I have to finish a lot of things on my to-do list though. Stream/poker/youtube/website related. I’ll keep you guys posted on Discord. Tomorrow at noon poker content as usual! Big blog but what a week. I mean come on!! Jesus. I live for this stuff. Thanks guys it was a blast. We’re on an awesome ride together and it seems we won’t be slowing down any time soon.