Pretty good week. I feel like last week was very important and constructive in a lot of ways. It was a bit of a weird week for the stream, but also very productive off-screen. On Monday I did a regular stream. It was fun, had some deep runs, nothing out of the ordinary. Tuesday I had to take off because my dad had a doctor’s appointment to check his Parkinson status. You have to do these to see how the medication is working out since the symptoms change constantly and the situation slowly gets worse over time. It’s an hour drive to the neurologist and I take him every time he has to go. That way I get closer to the process, can help him remember what’s important etc. So I had to take the day off.

Wednesday it was Dutch open time! I had won the tournament before and I had some 5th or 6th place as well. It’s a very fun tournament where most Dutch people come together trying to get crowned champion of Holland. It was the first live tournament I played since the EPT Grand Final in Monte Carlo. I have a lot of confidence in my live-poker ability. I have a ton of experience playing live tournaments and even more in playing high stakes underground games. Something like that doesn’t just fade. Every time I sit down at a live table I’m comfortable. It was no different this time. In fact, it was even better. Because this time I also had a fundamentally stronger tournament game at my disposal.

With anything, it’s just hard to hang with people who do something all the time. That’s why I have very little desire to play online hold’em cashgames. I haven’t played that particular form of poker in 5 years and it would be sheer arrogance to think I can just come in and do well. I used to play quite some live tournaments, so I had some practice in the format, but I mostly used the weapons I had, without working on the weaknesses. I was very good at playing big stacked. That’s the area I have more experience in than most MTT players, because it’s more like a cashgame. As a tournament got shorter, I was a little more out of my depth.

I think my biggest flaw during my live tournament period was, that I didn’t really respect short stack poker. I still don’t, but ignoring it is just shortsighted. Because of cashgames and people short stacking there I had a very vivid hate for short stacks. They would mess up deep-stack game dynamics and would always leave and find another table to play when they doubled, and another would take it’s place. This carried over into my tournament game and I refused to acknowledge it subconsciously. Now that I grind tournaments online during the stream (and being a little more mature), I have studied short stacking. It’s very comforting to know that you can play mathematically play 10bb stacks at least well. Doing something day in day out just gives structure to your game. Years ago when I saw a hand like K5ss I would sometimes think ‘oh lets reraise with this hand’ while now I have a whole range prepared for that spot and it’s way less situational. Of course in live poker you have to throw people-based reads in there, but it only requires a little bit of tweaking.

My confidence paired with some rungood, made it a very smooth cruise on day one. I ended with about 80 big blinds with a field of 43 remaining. 15 spots would pay so it was looking real good. On day two in the second level I lost a huge pot with ATss vs 56ss allin on 278ssx. I was pretty crushed when I saw the 6 land on the river. I really thought this tournament was gonna be the one. I was in the zone, playing well with confidence and cards fell my way. It’s the brutality of MTTs. To go really deep in one you have to survive hands like that time after time. Eventually I shoved 10bb utg with J9dd and got called by AK. I had a big tease on the flop, but faded and that was that. 33rd place.

I had a lot of fun during the (dinner)breaks meeting/hanging out with people from the stream. Bizzo, Letjal, mpadam and Milkovw all came down and we had dinner near the casino, as well as some beers afterwards. I really enjoy meeting people that I see on Twitch every day. It’s a good foundation for s 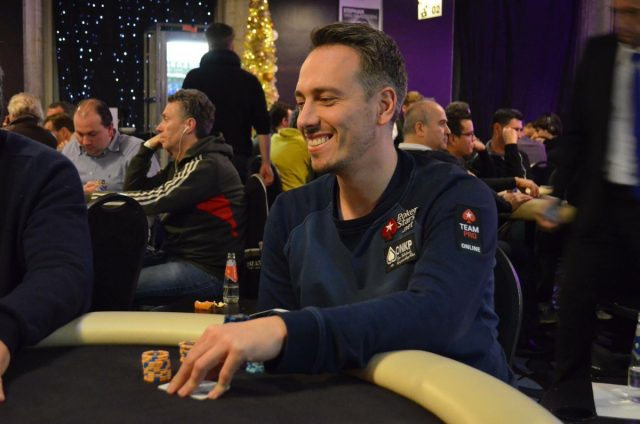 ome live tournament thing I will organize next year, so that everyone can see the faces behind the names. I was also repping the patch of the Open Nederlandse Kampioenschap Poker, which is a championship for amateur poker in Holland. I think it’s very important for people to have a low-cost first experience with poker, where everyone is new. I’m proud to be an ambassador and I can’t wait to visit some of the stops. The first event that I’m attending will be in Ermelo on the 13th of January, the kick-off. If you want to see what stops are near you click: http://bit.ly/2gElMG2

I have done a lot of thinking about the stream and I made some outlines for 2017. I’m gonna slow down on some side-projects to really be able to stream consistently. Stress from other stuff has made me a little bit more agitated sometimes, or even messed with my schedule a bit. Streaming is my top priority and I’m not gonna let that happen again. There will still be really cool shit happening though!

I hope you all had a fantastic holidays. I spent mine with my and Myrthe’s family. Good to see everyone come together and enjoy some food. And drinks. Lots of drinks. I will stream tues 27th till friday 30th. Also my birthday on the 29th, which should be a fun one. Then I take off till January 3rd and be back without days off after that.